Why Is Engine Oil Important?

There are many reasons why engine oil is essential, some of the main ones are mentioned below:

Prevents Friction In The Engine 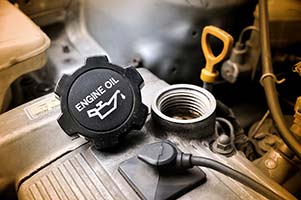 Engine oil to your engine is like how blood is to your body, if anything goes wrong with it or it doesn’t flow properly, your body will suffer, as will your vehicle if the engine if you don’t use a suitable and quality oil. If you think about your engine without proper lubrication, the metal components of your engine would grind against each other and fall victim to extreme amounts of friction and heat. Not only would that result in excessive wear of the engine parts, but it would most likely lead to cataclysmic engine failure.

Reduces The Build-Up Of Heat In The Engine

Naturally with friction comes heat, but the excess heat in an engine is a recipe for disaster, especially with all the controlled explosions that occur. The continuous movement of metal engine parts produce a lot of heat, but thankfully, due to engine oil acting as an insulator, it is controlled so that the combustion cycle is not disrupted or affected.

You are probably familiar with how combustion works, especially the importance of oxygen in this reaction. However, whilst it is vital, oxygen can take its toll on the metal components of the engine and cause oxidation. Imagine the horror the engine would face if there was nothing countering the oxidation! That’s why choosing the right engine oil is essential because one with the right additive will prevent the process of oxidation and the eventual corrosion of the metal mechanisms of the engine.

Consumes The By-Products Of Combustion

Engine oil is quite helpful when it comes to attracting and isolating the by-products of combustion, by trapping them in a thick suspension.

You might have read this subheading with confusion and thought… what are ‘SAE ratings’? Well, SAE is an abbreviation for Society of Automotive Engineers and they have developed a rating system to classify oil by its viscosity and giving it a ‘grade’. Taking it back to physics class, viscosity is basically a measure of a fluid’s resistance to flow. To elaborate, it refers to the ‘thickness’ or ‘thinness’ of a fluid, so, an example of a fluid with low viscosity would be water and one with high viscosity would be honey.

Okay, now we’ve covered the technical terminology, let’s see how it is relevant to car engines. To put it simply, motor oil tends to change its viscosity as the temperature increases and decreases. So, when heated, oil will become thinner and thus have a lower viscosity, whilst when it’s cooled, the oil will thicken and hold a higher viscosity. Using this information, let’s think about the ideal viscosity of engine oil in different weather conditions; in winter, you would want to use an oil with a low viscosity, as oil would solidify as the temperature drops and in summer, an oil with a higher viscosity would be better, to avoid it liquefying too much is the heat. Still with us?

How is the viscosity of the oil graded? Well, the notation used is the form XW-XX. The X before the W essentially rates the oils flow at -17.77 degrees Celsius (0 Fahrenheit) and the W stands for winter. For example, if it was 0W, that would mean the oil will thicken less in the cold than 5W, as the lower the number before W, the less it will thicken in cooler temperatures.

Now, moving on to what the XX stands for. This number will refer to the oil’s viscosity at 100 degrees Celsius (212 Fahrenheit) and the higher the number, the slower it will thin out in high temperatures. So, 0W-20 oil would thin out in higher temperatures quicker than 0W-40, for example, thus making it more ideal for cold start-ups and a better protection for the engine in cold temperatures.

Say your permanent residence is somewhere with a constantly cold climate, then it’s recommended you use an oil with low viscosity so that your engine isn’t left to dry run for too long when you first start your car. The more you reduce this period of dry-running and get the oil circulating quickly, the less wear and damage your engine will face.

What if you’re browsing SAE ratings for oils, and you come across a rating that says SAE 20, for example, without the XW part. This merely means that the oil hasn’t been tested in cold conditions, only at 100 degrees Celsius.

I hope we didn’t lose you, but now you understand what this rating means!

What Are The Different Types Of Engine Oils?

We’ve established what SAE ratings are, so moving forward, we can discuss how these ratings are related to the three important types of engine oil. As the world of automotive engineering is becoming more advanced, the properties of motor oil are being developed to the point where they can be efficient enough to protect all the functioning parts of an engine!

Let’s have a look at what the three sorts of engine oils:

Fully synthetic oil basically means it’s a manufactured product and not refined from a naturally occurring substance, like crude oil. Below, we’ll list the 3 different SAE ratings that will indicate the engine is fully synthetic oil and each one’s characteristics that will benefit your engine:

Whilst this oil is more on the pricey side of your engine oils, there is a good reason for it. In addition to all the benefits listed above, synthetic oil has a longer lifespan, meaning increased oil change intervals.

This is kind of a hybrid oil; a blend of fully synthetic oil and conventional oil. The common SAE ratings and the characteristics of this particular oil are listed below:

If fully synthetic oil will put too much of a dent in your wallet, synthetic blend oil is the next best thing!

Finally, conventional oil is refined from crude oil and with no special modifications, with these common SAE ratings:

This is the cheapest of the oils, and whilst it will provide the basic requirements for your engine, it won’t provide your engine much protection against cold temperatures. It may be more suited for people who own cars with simple engines.

Is It Suitable To Use Diesel-Rated Engine Oils In Petrol Engines? 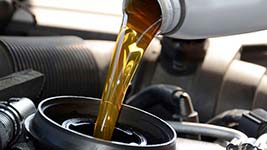 Quite a few people ask this question, but it’s not just a simple yes or no answer, unfortunately. To begin with, diesel engines have the tendency to get incredibly hot, due to them having a higher compression ratio than petrol engines. This usually means engine oil for diesel cars need a more specific formula, such as detergents added to them, to counter the fact that there are more by-products present from combustion in a diesel engine.

Additionally, the products of engine oil for diesel vehicles are more specific to suit these types of engines, for example, an anti-foaming detergent is added to diesel engine oil. So, it doesn’t make sense to add an engine oil with additives suited for a diesel engine, to a petrol engine.

To clarify, the recommendation would be to not interchange engine oils, however, some modern motor oils are designed to fulfil the necessities of both diesel and petrol engines. So, if you do your research and ensure you’ve got the right diesel oil that meets the requirements of a petrol engine, then you can go ahead and fill your petrol engine up with it!

What Is The Service Life Of Engine Oil?

You would think engine oil wouldn’t go off, but actually, they have an average shelf life of around 4-5 years, but that is stretching it a little. Think about it, over the years, engine oils that have just been sat around, unused, will become outdated and may even possibly fail to fulfil the engines requirements. This depends if you’re contemplating on using an engine oil that you bought for your old car, in your new vehicle.

When you’re browsing through the different engine oils for your vehicle, most of them will claim peak performance for your engine. Trustworthy engine oils are thoroughly tested to make sure your engine works optimally. However, be wary of the additives that are added to the oil, because they can be a risk to the overall performance of the engine oil, so ensure you know what the best oil additive is for your vehicle.

Regardless of what oil you put in your engine, you will eventually need an oil change. So book in with Sinspeed today for this service!