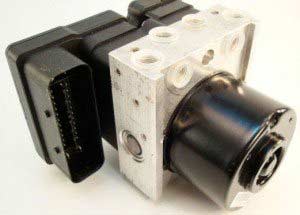 The Teves MK70 (ATE) ABS unit is fitted to many of the Ford models which include the C Max, Fiesta, Focus, Fusion, Ka and Transit. It has been diagnosed with almost as many issues and design flaws as the earlier Teves MK60 ATE ABS pump. Any customers that are familiar with the issues experienced with the Teves MK60 will know how much of a nightmare they were. Both units have pressure sensors integrated internally within the unit with a low maximum pressure rating, and have suffered identical common failures.

Faults are normally investigated by carrying out the vehicle diagnostics and recording the fault code relating to the wheel speed sensor. If after replacing the faulty sensor, the issue still exists, then the ABS unit would be scrutinised further. We are also aware that occasionally water ingress can cause / contribute to these failures, and that another fault that can also occur is the inability to communicate with the ABS unit at all, however, both of these faults can be tested thoroughly with our in house testing facilities.

Sinspeed’s ABS Repair Service
As we are aware of the ongoing design flaws of the Teves MK70 ATE ABS pump such as the common failing internal G201 Brake Pressure Sensor fault, we not only repair the unit, we also modify the units to ensure that the design fault has been permanently rectified to ensure complete peace of mind that the unit will not fail again in the future. All customers are given Lifetime Warranty on their repaired units.

We have rebiuilt thousands of these units over the years, and now also carry exhange units on the shelf for faster turnaround time. Our exchange units are self-calibrating and will not requore any programming. We also offer fitting services at very competitive rates.

If you have a faulty Mondeo Teves MK70 ATE ABS / ESP Pump fitted to a C Max, Fiesta, Focus, Fusion, Ka or Transit, and are looking for a repair or replacesment of your damaged ABS unit, then give us a call today on 0844 847 9999.