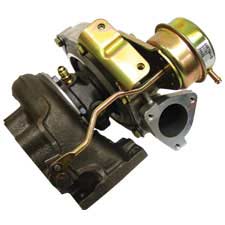 Here at Sinspeed, we can repair all types of turbo charger units. For an instant quote simply give us a call on 0844 847 9999. Below we’ll give you advice & information to help

protect your turbo charger for the future along with common faults.

The GT28 Garrett turbo charger is a unit fitted to sporty cars and is widely available as an upgrade unit for many cars such as one of my personal favourites, the Nissan Pulsar GTi-R. These turbo chargers can

produce a lot of horse power in their somewhat little shells, however, we’re finding that they are failing on a daily basis and 9/10 times it’s due to their respective owners not really knowing how a turbo charger works or even how to protect it against damage. Is it possible to damage your turbo charger from just casual driving? It certainly is! We’ll explain below.

Turbo chargers spin at over 25,000RPM and rely on oil to keep them well lubricated so that they don’t break down. When the engine is cold, the oil becomes thick and so takes longer to travel around all the mechanical components. When you’re changing the oil in your engine, that same oil is protecting the turbo charger as well as the internals of your engine. If the oil is old, it is weakened and will have less protective properties left. Imagine starting the car in the morning, the oil is cold and thick and so can’t move very quickly.. if you was to drive off in speed, your turbo will spool up (kick-in) and do it’s job but not be very well protected against wear due to lack of oil.

9/10 times turbos that are sent in to us for repair or exchange are found to be oil starved and thus their seals blow out and bearings break up inside. This can lead to fin damage on the turbo splines and can mount up to a lot of money.

When a turbo charger has spooled up and the turbines are spinning in tune with the speed of your engine & acceleration, all is good but when you release the accelerator pedal, that’s

when the pressure begins to almost instantly build up inside the turbo charger housing. This causes the turbo to slow down, stop or even “reverse” it’s spinning motion – This reversal is called “Back-Spin” and I’m sure you can imagine, back spinning a turbo charger can not be healthy.

Back spinning can cause problems such as snapped shafts and cracked housings as well as bearings breaking up inside. To eliminate back spin, we always suggest fitting a BOV (Blow Off Valve) to any turbo vehicles, even if you’re not using it for racing, having a blow-off valve is good for motorways when the turbo kicks-in it will help protect and prolong the

Back Spinning is also caused when you don’t allow the turbo charger enough time to cool down before switching the vehicle off. If you’ve just gone out on a long run or a motorway sprint, somewhere where the turbo had to kick-in and spooled up for some time, the impellar(s) are spinning extremely fast – you must give the turbo enough time to slow down

gradually and at the same time cool down before you switch your engine off (we suggest between 30-90 seconds is adequate). If you switch your engine off immediately (and lets face it, everyone does) you risk damaging the turbo charger or at least reducing the life expectancy of the turbo charger unit. For all you know, the unit could already be damaged – check to see if it’s leaking oil into the intercooler pipes leading up to the inlet manifold, it’s a common failure across all turbo charged vehicles for this exact reason.

When a turbo charger fails, you can expect to notice any of the following effects:

We rebuild all turbo chargers using only the highest quality parts to meet & exceed the OE standards. We not only repair your old turbo chargers but we carry them in stock remanufactured and new. If you require a fitting service, we can accommodate this too.