Peugeot DPF Removal Service
Peugeot DPF (Diesel Particulate Filter) systems, also known as FAP are similar to those on the Fords and Citroens as the vehicles share the same mechanical design – so they carry the same faults! However, we’ve found that Peugeots seem to have blocked DPF’s normally caused by faults within the additive system whereas with the Fords, a majority is down to injector problems. Some of the later Fords do not have the additive tank systems.

If you’re experiencing problems with the DPF (Diesel Particulate Filter) System on your Peugeot, it is strongly advised to act fast. A blocked DPF can quite quickly escalate into a much bigger problem.

When the DPF blocks up, the excess build up of back pressure will put a lot of strain on the turbocharger as it is the first mechanical component connected directly to the exhaust system. The extra strain in the turbo can cause the seals to fail which could then leak oil into your inlet pipes and into the exhaust – furthermore the carbon from the exhaust will contaminate the oil also known as carbon-backup.

The problem doesn’t stop there, the excess back pressure will pressurise all the way back up into the engine and injectors and will eventually blow oil seals. The carbon can crystallise within the engine and in such instances, without replacing the engine there is no guarantee to completely remove all crystallisation – even with engine flush!

Are You Experiencing DPF problems such as: 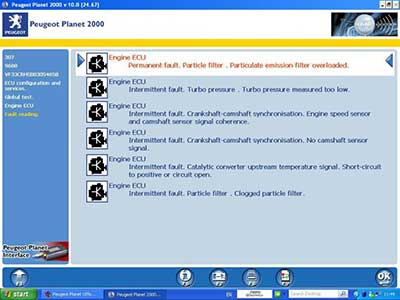 What Are The Options For A Blocked Peugeot DPF?
You can simply either replace or remove the filter. A regeneration may work providing it hasn’t required a forced regeneration previously – otherwise it will simply just block up again quite quickly as each time you force regenerate the filter you are damaging elements of the filter at the same time that would normally allow the filter to clean through normal regeneration. Same time, you are putting a lot of strain on the turbo and engine when carrying out forced regenerations so we do not particularly recommend it.

If you decide to replace the DPF on your Peugeot with a new one, make sure you’re using ONLY genuine filters – copy filters can be purchased for as little as £150-350 but they will not last at all. A majority of our customers have come to us after buying copy filters as a quick fix and finding they were back to square one but sometimes at a loss of £400! – Do it once & do it right, either replace your blocked Peugeot DPF with a new genuine part or remove it completely and professionally.

If you’re looking to remove the filter, we feel this is the best and most complete solution available. By removing the blocked DPF and reprogramming the vehicle to run optimally without the filter, you’re guaranteed increased performance and fuel economy gains and best of all peace of mind that you will NEVER experience DPF-related faults ever again. – Providing it is done correctly!

How Can Sinspeed Help With A Blocked Peugeot DPF?
Most of our customers when coming to us have already tried other methods such as cleaning the filter and such but not realising they can potentially be doing more harm than good. We can completely remove the DPF (Diesel Particulate / Particle Filter) from the exhaust system and simultaneously reprogram your vehicles engine ECU to ensure you won’t have any more problems such as Limp Mode, Warning Lights On Dash, Loss Of Power, Smoke & Poor Fuel Consumption etc. – Also when doing so, we can remap your vehicle to smooth out any flat spots in the fuelling / air flow maps and increase the performance and economy of your vehicle at the same time.