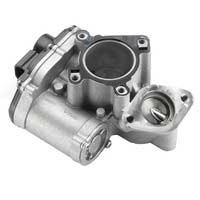 Citroen EGR Valve Faults + Problems
Does your Citroen smoke on acceleration? Or do you find your Citroen loses power whilst driving on the motorway? These are just some of the indications that your EGR Valve may be blocked. The EGR valve was created to allow exhaust gasses to recirculate into the engine, in order for them to be re-burnt before being released into the atmosphere. In essence, this is ideal as it reduces vehicle emissions, however, eventually, it can start causing issues. As mentioned above, due to the build-up of carbon in the inlet manifold and engine, as well as around the engine valves, causes a decrease in the power output of the engine and smoking issues.

EGR valve failures are known to be very common on Diesel Citroen’s. They were much easier to bypass on older models, however, newer models are equipped with more sophisticated systems where the engine ECU’s are programmed to be able to tell when the EGR has been bypassed/blanked off, bringing up fault codes, warning lights and even causing the vehicle to go into ‘Limp Mode’ to restrict the performance.

Common problems of a failing Citroen EGR Valve
If your Citroen is suffering any of the issues listed below, they could be indicating that your EGR valve has either failed or is blocked:

The obvious option with a failing EGR valve would be to replace it, however, this can work out to be very expensive and may not even completely fix the problem in the long term. As the exhaust gasses are constantly recirculated, it is inevitable that over time, the valve will get sticky due to carbon build up, going on to cause problems. Therefore, if replacing the EGR valve for a new unit, it is recommended that it is removed and cleaned thoroughly with every other service to ensure it is maintained.

The other option would be to delete the EGR valve from the engine ECU by programming it to stay shut at all times, and by blanking it off, it ensures that it does not recirculate exhaust gasses into the inlet / engine. If the EGR is programmed to remain shut at all times, it will stop any fault codes and warning lights appearing, as well as any ‘Limp Mode’ problems.

Citroen EGR Delete Service by Sinspeed
Here at Sinspeed, we offer a completely bespoke and safe EGR Delete service involving the complete deactivation of the EGR Valve system. By logging into the vehicle’s on-board engine management system via the ECU, we are able to switch off the EGR valve to ensure it stays off at all times. This then means that the gasses will no longer recirculate into the engine and therefore, will stop it from clogging up. When done correctly, it will also ensure that no fault codes or warning lights appear, as well as no power loss.

Below we have compiled a list of Citroen’s we currently offer the EGR delete service for. If your vehicle is not listed below, please contact us on 0203 815 9441 to confirm if it is one we can offer an EGR delete for.